I love that my little girl brings out the fight in me. The lioness. She craves my wildness so she can embrace her own. 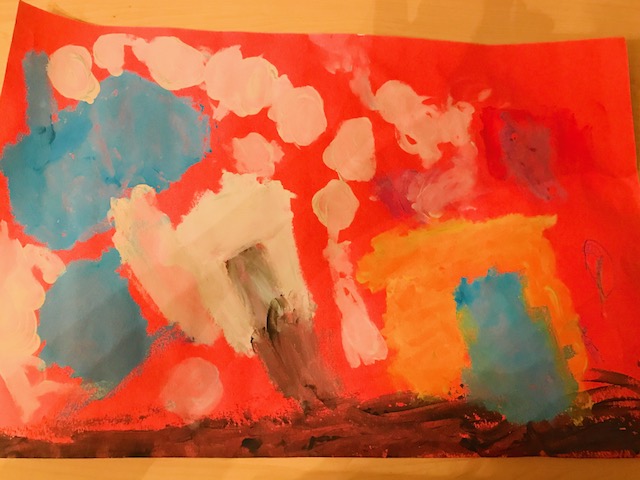 My daughter is a fierce little creature. She will not back down for anyone, for anything. I try to imagine myself as I was at her age. Her fearlessness, her unbridled zest for life. That time is becoming fainter in my mind. Like the edges of a picture softening. I suppose this is the process of growing older. I’d like to think I remember what matters. The essential grace of my life as a child.

Most of my early years were spent outside. My mother felt at home outdoors and she wanted that peace for me. I can close my eyes and I’m instantly surrounded by fragrant joy. I spent many happy hours sitting in the grass making crowns from clover, under the purple lilac tree in our front yard. I can still hear the bees buzzing in the lazy summer air and the gentle pricks of grass on my bare legs. Once I came home from playing in the woods all day and I was covered in aphids. I remember my mother singing as she washed them out of my hair. I liked seeing their little green bodies floating in and out of the bubbles. Like they were having their bath also. My mother’s happiness at the evidence I was a wild thing in the woods even for just an afternoon sticks with me. She could have been angry. She could have been afraid. Instead she found it hilarious and part of the circle of life. That was a gift she gave me. I got to be a fierce little creature that afternoon.

Alice was determined to wear her princess sock the other morning. It had no match. Should it have mattered whether or not she could find the match? Probably not. But she’s been challenging me on everything lately and I just did not want to back down. Because after the princess sock it would have been her shoes, and after the shoes her jacket and then wanting a certain snack in the car and I did not have the energy to battle her! Ultimately the battle over her sock was as big as all the small battles together would have been so as usual my daughter won. I am a lioness raising another lioness, although she is mostly a straight up wildcat at only four and three quarters and she lets me know it every single day.

I’ve been battling the waves of bipolar lately. Up and down, back and forth, I’m being tossed around the stormy sea of my emotions. It’s so hard to feel like I’m making any progress on bipolar storm days. All I can do is breathe in and hold, breathe out and hold and let it be. The hardest days for me are when the weather outside is changeable. It makes me feel changeable on the inside. There is a distinct feeling to storm days. There is almost an electricity to my mind. I inwardly tell myself to “batten down the hatches.” As anyone with bipolar knows it doesn’t matter how much medication you take, there will be bad days. Really the only thing you can do is get through them.

I use sensory tricks all the time. Certain smells really help me. I am a connoisseur of perfumes, scented lotions and essential oils. Certain textures also really help, the softer the better. My family knows what it means when I’m wrapped in a blanket with a hat on and the fireplace going, candles lit and the scent of lavender pervading the room. It means I’m taking care of myself. It means I’m doing battle. It means I’m being strong as hell. I am captaining my ship over ferocious waters, through the vicious bipolar storm.

I talk a lot about wanting my daughter to learn to fight for herself, wanting her to be a warrior. But what about when the enemy lies within? That is a different kind of battle, needing a different set of skills. In a sense you are doing battle against your own mind. I find that when I am struggling it even leaks over into my dreams. My dreams become chaotic and often terrifying nightmares. I would be lying if I said this disease were not agony. I often want to still the clock for the duration of the “dip” and let it spin again when I feel more able to handle the world.

Alice senses so much of what I’m going through. The irony is the more depleted I feel the more she wants to cling to me almost as if she is pulling me out of the storm by the sheer force of her will. I have to remind myself to be consistent with her, not to surrender to the beast all children become when they know mom is tired and they might “get away with something.”

Today, after picking Alice up from school she had to use the potty. “Mama I need to go potty!” Literally the next sentence I heard her say was “Mom, there’s pee on the floor and I puked in the toilet!” She said this with the same matter of fact tone she says everything.

“What?!” I was trying to figure out the extent of the damage.

“I said there’s pee on the floor and I puked a little bit in the toilet because I don’t feel good.” I was already up the stairs by then.

“How did you get pee on the floor?” She then demonstrated how she sat too close to the edge of the toilet and the pee shot out over the edge in a yellow arc. Luckily there was a rug easily washed to catch the evidence. “Poor baby why did you throw up?” She hasn’t felt well lately and I was genuinely concerned.

“I don’t know, but I’m better now. Can I have chocolate?” I envy her youthful ability to quickly move on from things.

“Alice, of course not, you just threw up!” At this response to her query she began to howl and yell the word chocolate over and over again. My head felt like a balloon about to pop. I calmly looked at her and said, “since when has that ever worked with me?” Inside I was praying this would be enough to dissuade her. Amazingly it was. She quit howling and ran over to the pantry. She climbed up and grabbed a bag of chocolate chips, thrusting them at me.

“You really need to hide these higher!” I suppressed a laugh.

“Ok goofball.” I shoved it behind some cans on the top shelf. She was onto the next.

“I really need something sweet! These crackers!” It made no sense.

“What? Those are gluten free cheese crackers, they’re not sweet at all.” At that moment I realized this was the best part of my day. My weird, wild little daughter climbing in the pantry like the fierce creature she is.

“Well, they’re a little bit sweet…and I can have cheerios! With Almond milk!”

“Sure, that works.” All in all this was a happy outcome. She was momentarily satisfied. Soon after eating she asked for a movie on her grandma’s laptop. And then she wanted to paint space. And she did, beautifully. My daughter moves so fast I have to race along with her. Together we are going at top speed and before I know it I am flying above the raging waters of my illness.

I love that my little girl brings out the fight in me. The lioness. She craves my wildness so she can embrace her own. I know I will never stop learning from her, as she learns from me. That is the best part. The storm may throw me in a million directions. But my daughter will always guide me home.

With you I am me.
With you I remember my loveliness
Effervescent Time traveler you—
Simple grace little one clinging, singing, running faster than I can breathing in and out
Chewing on your collar
How can someone so small be so majestic
Mighty
Mommy’s little wildcat
Fight forever baby girl

Author: The Girl With Invisible Wings

I’m a writer and mother of four, one is a star in the sky winking. I live with my husband, mother, 5 year old daughter and 15 year old son in Wasilla, Alaska. My oldest son lives In Oregon making a name for himself. He likes to meditate while doing headstands. I work part time at my daughter’s school and write when inspiration comes. I sing and write songs as well. I find liars repellent. I am in love with intelligence and purity. I’m not easily impressed. I have fallen and I don’t need to get up. Alis Propriis Volat. View all posts by The Girl With Invisible Wings